I’ve now had a couple of weeks to recover from Pip’s birthday party – it’s hard to believe my little girl is two already! Since February she’s been adamant she wanted a dinosaur birthday party (and I was secretly very relieved she didn’t choose Frozen) so I had plenty of time to get planning.

Early on I knew I wanted to make some cool party bags, and inspired by Pinterest I decided on making paper mache dinosaur eggs. This was by no means a quick process and after I’d make a couple I found myself quietly cursing Pinterest! Here’s a quick tutorial:

– using regular balloons, blow up to a size that will fit your party bag bits in (the tallest thing in Pip’s party bags was a pencil so the balloons had to be big enough to fit those in). Don’t make them too big as it will take longer to do the paper mache!

– using newspaper cut it into strips. Mix pva glue and water (2 parts glue to 1 part water) and glue the strips onto the balloon.  You can do a couple of layer before leaving to dry.  Once dry do a couple more layers and leave to dry – the newspaper should then feel pretty sturdy and you can then stick a pin in the side and pop the balloon.  I found it helpful to stand the balloon in a bowl while doing the paper mache to stop it rolling around all over the place.

-once you’ve popped the balloon, you can cut a slit at the top (where the balloon knot was).  I cut a couple of slits  of about 7cm coming out from the top at wider than a right angle.  I found I could then get all the goodies in the egg without creating a big hole (You can also try and remove the popped balloon from the middle at this stage if you can). You then need to do a couple more layers of paper mache to seal it up.

– then it’s on to painting! I got hold of some bright crayola paint – it took a couple of coats to cover up the newsprint but I think they turned out pretty well, and I added a few spots to make them look a bit more ‘dinosaury’ 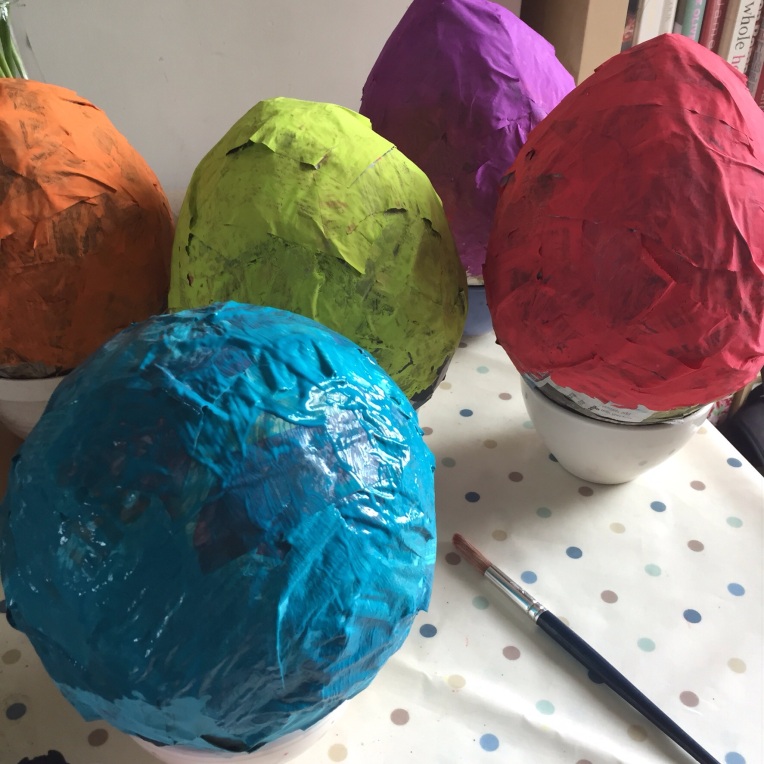 NB. I would not recommend these for a large party – I made 10 and it took a fortnight!! Also warn parents of small children that there may be bits of popped balloon inside! I’m sure the kids will need a hand opening them – though one child successfully managed to rip his open on the car ride him 😉

As Pip is pretty active these days I wanted to get her involved in making the decorations for the party. A really simple activity was making a dinosaur garland.

With the help of my lovely friends we drew some dino outlines on bright coloured card and cut them out. We then let Pip and my little god-daughter Izzy decorate them with googly eyes and sticker spots.  Really simple and fun, the girls loved it and I think they did a great job! 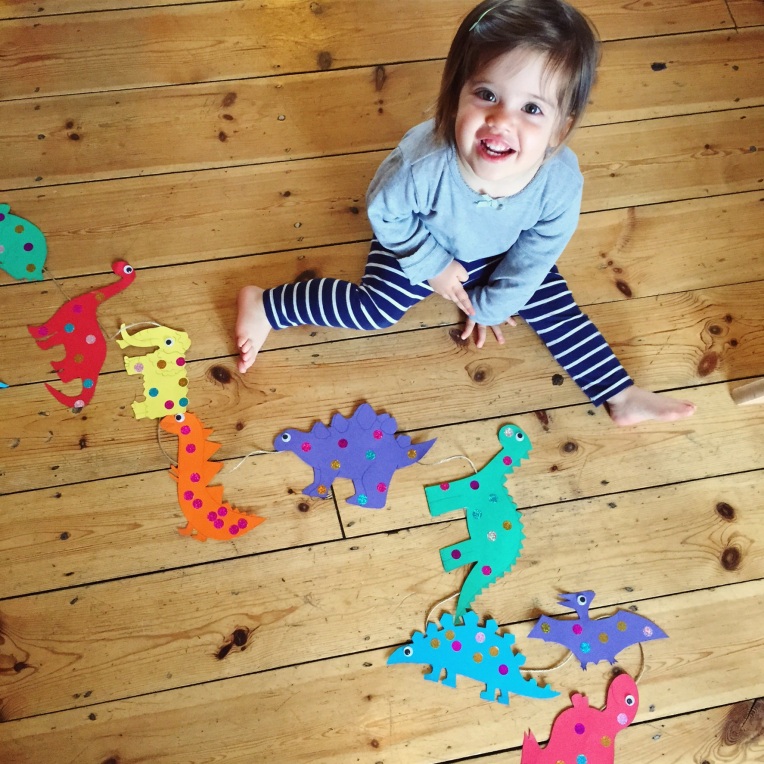 Whilst I had my little helpers to hand we also set about making some jungle leaves garlands to decorate the living room.  I stuck some green card to our easel and the girls did some hand painting with orange, yellow and green onto the sheets of card. I then cut them into leaf shapes and punched holes in the top.  They would have been a bit tricky to tie onto a garland individually so I crocheted a chain of chain stitch (slip stitching into the leaf holes to join them).

Well it wouldn’t be a proper dinosaur party without a costume would it!

Having looked around for dino costumes I just couldn’t find any cute ones, but I did find a great tutorial here to sew a dinosaur cape.  I adapted it a bit as it suggests using fleece and as this was a summer party I thought cotton might be better, but not much of a difference, I just added a few hems.  I used some stick-on Velcro at the front as a fastening (I didn’t want it to be a choke hazard!) and tada!

We made Pip a large ‘1’ last year made out of photos from her first year, and we had so many nice comments that I wanted to do another this year – it’s nice to reflect on the last year.  It’s very simple to do – just get a large sheet of rigid cardboard and a stack of printed photos – I used pics from age 1-2 this time.  A bit of arranging, cutting and glueing and voila! It was also a nice activity for me and hubby to do one evening after Pip had gone to bed (no he didn’t manage to escape the crafting!) 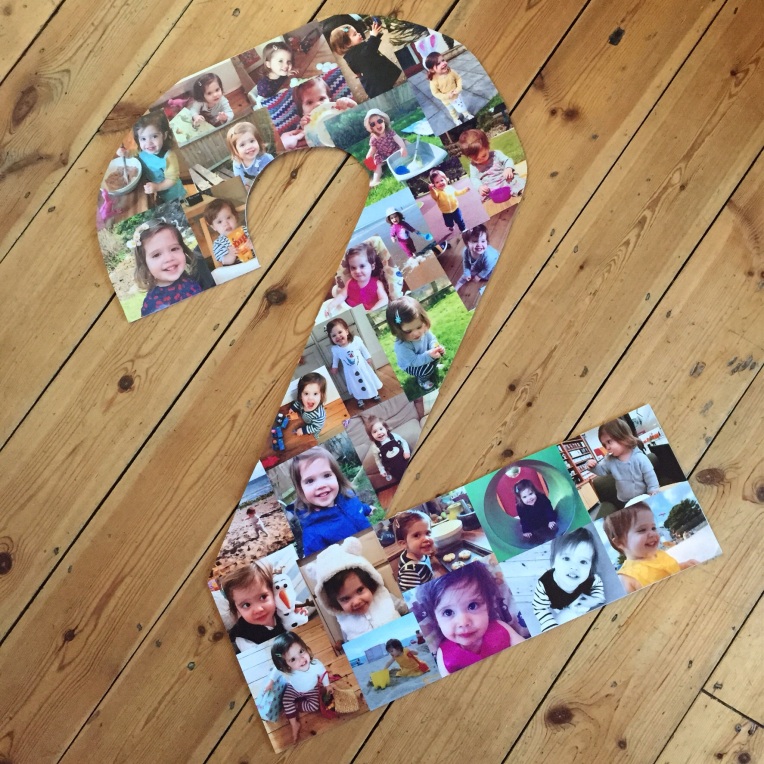 And of course the birthday girl needed a suitably dinosaur-themed present.  I’m a huge fan of Heidibears patterns and have made the Happypotamus and Owl designs previously.  But the stegosaurus pattern is adorable! You can see all her patterns here .

These are not quick but once you get the hang of the African Flower pattern the motifs aren’t difficult.  I started this in February to give me plenty of time (and with all those dinosaur eggs I’m glad I did!).  I used Stylecraft Special DK yarn and a lot of toy stuffing! The finished dino is 90cm long, nearly as big as Pip- but she loved it and that’s all I can ask for 🙂 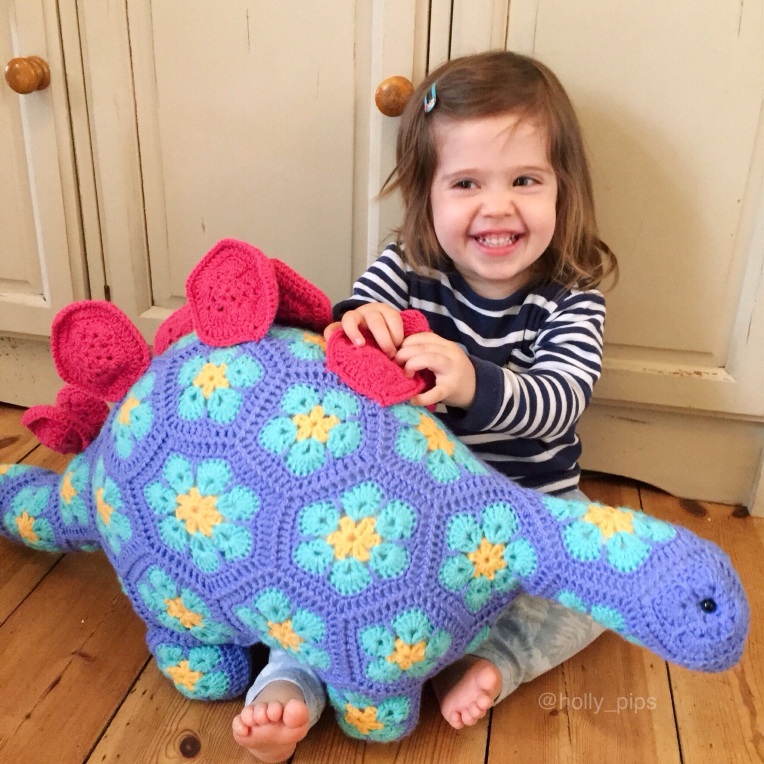 Anyway if you’ve got to the end of my dinosaur ramble thank you for reading! At this rate I should start planning now for Pip’s 3rd birthday! 😉